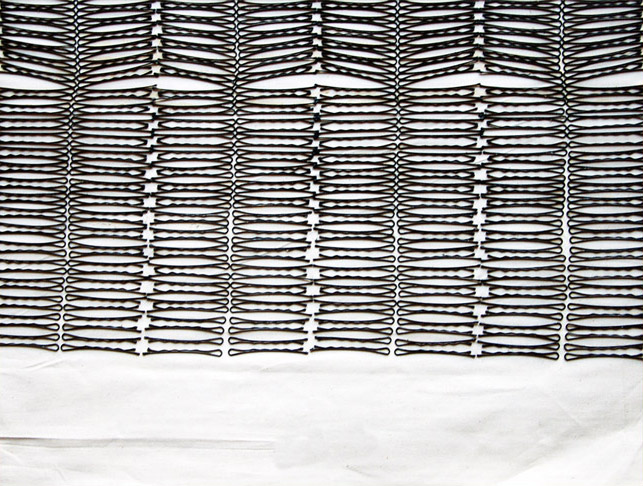 Diaspora is a piercing theme which is also my own story. It is a challenge when you recall the residue of collective human suffering over one’s own. You realize that the aftermath of international power struggles is coming to your breakfast table. I am but a small, living part of the collective body of trauma. This is the place that, I think my paintings were being made from. Painting about things that I don’t have the proper language for.

I was born in Tehran in a transition period from Monarchy to the Islamic Republic, and theocracy. I remember how buildings and people changed gradually. I remember homes transformed into secretive spaces. I remember how architectural open spaces became covered with materials and clear windows became matte. The first apartment that I lived in growing up was designed to have a communal swimming pool, which never came to fruition. Due to the change in regime, and to make it a more conservative, they turned it into a garden. Who dare wear swimsuits anymore?

In the of Curiosities, I work in layers to emphasize the sense of space and movement in- between. I choose a part of my city, a building or a corner of a street that I feel like to take a walk in and I begin reimagining it all over again into my canvas. I address displacement delving into emotional and historical layers of public space and memory. The way social and political changes transform civic spaces is of particular interest to me. I use architectural elements as an entry point. Rebuilding a space by recalling the images. I don’t mind if the result grows distant from reality. I celebrate the birth of a fresh space in my paintings emerging from the interference of the world I live in and my disrupted memory of the past. I see the architecture as the self- portrait of our generation.

The Current series is the result of stories, events, scenery and memories that Houston contain in itself and reveals softly to a new comer combined with my memories of road trips and city life in Iran. In these paintings I am traveling between near and far lands, similarities and contrasts, and within past and present hoping for a glimpse of light in future.

Most events in Iranian history have been documented in literary rather than visual form. Unlike Western Europe, Iran does not have a lengthy or pervasive historical painting tradition. In these paintings, I will explore the aftermath of the Mongol invasion of Iran, which is a topic that has been covered extensively in Iranian literature but has not been significantly addressed through the visual arts.

Formally, thematically and philosophically, I probe the aesthetic and ethical dilemma of representing an event that happened in 1220. I am fascinated by the lasting impact of collective trauma on our modern society and trauma theory. How trauma can be passed through generations and lead to further catastrophes is of particular interest to me. Iran is a country still dealing with a long history of trauma and catastrophe throughout its development in the modern world. It has been hypothesized with a great deal of evidence that the long-term consequences of the Mongol invasion – perhaps Iran’s most significant historic catastrophe — are apparent in the political, social and scientific history of this country.[1]

I am also curious in how natural landscapes and topography can affect human nature and cultural history. In the scholarly work of Professor Abbas Edalat, it is mentioned that “in the fifth to the eleventh century, the entire region of central and western Asia was in the grip of a ‘significant cold spell’ which lasted approximately 130 years, a period which has been named the ‘Big Chill.’[2] This phenomenon caused a great economic depression in Iran and initiated the migration of many bourgeois families to India and warmer lands. The country, prior to the invasion, had lost its labor force and productive energy, and was weakened and unable to defend against uninvited guests. The environmental changes were in large part the cause of the trauma itself.

Through this series, I am not attempting to illustrate a historical event; I am instead looking to create an independent concept that can continue its life freely from the subject. I hope the work will bear a traumatic quality that can be extended to the collective history of humanity under its layers.The use of cold and neutral colors emphasizes a traumatic episode; contrarily glorious bright colors remind us how trauma has been treated through our cultural history. Traumatic Historical events have been celebrated in subtle miniature paintings leaving the painful recurrence to literature and stories, as if it has been a story of the One Thousand and One Nights. While painting, I struggle to mediate the relationship between Iran’s deeply traumatic history, and viewers who are unfamiliar with Iranian history but familiar with trauma. I also examine multiple interpretations of the invasion, infusing my work with a commitment to empathy and compassion for the wounds that we cause each other through misunderstanding and ignorance.

Since living in the U.S., familiar Iranian images have become more vivid in my mind. Have these common signs and symbols changed meanings for me? I now ask why they have been repeated throughout history. Incorporating elements of Iranian storytelling traditions, the paintings explore how narrative transformations occur as stories are passed from one generation to the next. I accomplish this by using abstract representations of text, as well as going back to the cultural signifiers of Iran and memories of landscapes. Combining all these signifiers with the content of the Mongol invasion allows me to better see how trauma can affect cultural development. Talking about narrative visual elements and memory of landscape I can name three very different artists who have been an influence to me. The most significant is Sergei Parajanove the Georgian cinematographer. His narrative line, both in his movies and art works is what amazes me. The Color of Pomegranate (Sayat Nova) is his most substantial piece which I believe anyone from the Middle East could relate to.

Repetition, both hidden and clear, is always present in our world. Repeated threads hanging, patterns growing continually, windows framing the glory of repetition in our domestic space and chains of mountains framing nature around us. It doesn’t stop there: our history is a recurrent version of ourselves. This prompts me to ask ‘when do our habits and traditions lose their meaning?’  I want my paintings to serve as subtle whispers, whose repetition – like the formulaic and relentless repetition of patterns in Iranian tapestries– will make a quiet but lasting mark on Iranian cultural imagery.

The enduring legacy of the Mongol Catastrophe on the Political, Social and Scientific History of Iran